It’s time for some jaunty music that combines my love of all things pirate-y with my passion for veganism. I thought when i released Go Vegan This Christmas i had exhausted all the different ways to write about veganism in my music, how wrong i was! 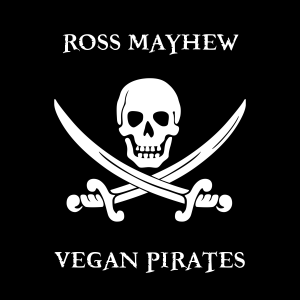 Last year i finally released the finished version of my 20 minute epic The Tale Of Richard Forsyth, a story i wrote set in the age of piracy that tells of love, loss and revenge. I’ll put to the YouTube video for that song at the end of this blog post for those who feel like checking it out. While we’re on a pirate theme.

As much as i love The Tale Of Richard Forsyth it’s not really a song people just can just pop on, it’s 20 minutes long and has a story arc. I have pondered about furthering the story in a new song but that hasn’t happened yet. It’s best not to chase these things but let them arrive in their own time.

I’m not sure what started me off writing Vegan Pirates but it did just pour out of me once i got the tune down, the tune is a fairly similar to my song The Vegan Gypsy. I guess it’s my distaste for law and order that gives me my love of the romanticized pirate life, i’m all for love and kindness but never been a fan of authority at the same time.

As you’ll be able to tell from the lyrics it’s all very cutthroat and lawless, i guess a call for everyone to do what’s necessary as we continue our fight for the animals, make no mistake this is about them, not us! Saving the earth and better health are just a delightful bonus.

Once again Duncan Chave who i work with at Sound Gallery deserves a lot of credit for bringing the song to life. I of course go to the studio with ideas of how i’d like things to sound but he manages to add those extra touches that really helps. The little outro was an accident but a lovely one, the perfect way to end the track.

We did have a joke about just what other vegan themed songs i could conjure up but for now i think the well is dry.

At this moment in time you can find the song on Bandcamp, SoundCloud and YouTube but it will appear on a NEW CD that’s coming soon, so stay tuned for news on that.

Thank you as ever for reading, i’ll put the link to The Tale Of Richard Forsyth below.
Have a great day all!