After 8 hours in a basement in Exeter (Sound Gallery – where else?) my album is close to completion, perhaps just a few little tweaks to make and then info such as the tracklist, release date and the like will be on hand to share with you all 🙂

But first tales of a song and some upcoming gigs! 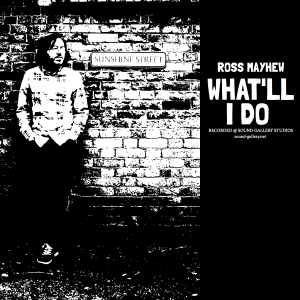 What’ll I Do Artwork

It wasn’t only my album i was working on in the studio upon my last visit however, i worked on a few bits and pieces and one of them was this cover of What’ll I Do, which you may have noticed appeared on Bob Dylan’s latest album Shadows In The Night and it’s a well known classic, having been recorded by Frank Sinatra, Nat King Cole, Willie Nelson, Judy Garland and countless others, even Cher, although my memory of the song comes from it being used as the theme for the rather terrible BBC sitcom Birds Of A Feather.

When i first got my copy of Bob Dylan’s latest album i had to keep playing the track until i remembered where i’d first heard it and lurking deep in my repressed memories was the Birds Of A Feather intro but lets not hold anything against the song for that misuse of it, after all it’s a fine song and i’m glad i’ve added to the many covers of it already recorded – Cheers Irving Berlin for a fine song!

Gigs are a-comin’
As i’m blogging away i might as well give you some gig updates. Next up in my appearance on Trevor Lloyds Songwriters Circle Radio Show this Wednesday (Sept. 9th) between 5-7pm on 10radio.org and following on from there i’ll be performing at a Vegan Fayre south of Plymouth on Sunday the 13th and the Penzance Peace Festival on Sunday the 20th.